History of the Nagash project

Years ago as an Armenian-American first starting to explore Armenia I took a trip to Garni temple just outside of Yerevan. Seemingly out of nowhere I heard one of the most beautiful sounds I have ever heard. It was the 5 singers of “Luys” rehearsing. I was immediately captivated by their sound and knew that I wanted to write something for them. Their repertoire was principally Medieval Armenian Spiritual Music with the occasional folk song thrown in for festive occasions. At that point I don’t think they had ever collaborated with a living composer.

It took years to discover the right text. I spent many months researching in the libraries of Yerevan, New York and Berlin. When I finally came across a small fragment of the Armenian medieval poet Mkrtich Nagash, the words leapt off the page and into my soul and I knew I had something I wanted to work with. Being in Yerevan at the time I was able to track down the rest of the remaining 17 poems. After weeks of contemplating which texts to use and how to begin, I resolved that I would set all of them.

Without a specific ensemble in mind (other than the 5 women vocalists of Luys) I began letting the texts dictate what the music should be. The instruments of the accompanying ensemble were chosen intuitively and I don’t now of an ensemble with an identical makeup. In retrospect the ensemble is a wonderful compliment to the texts with elements of the formal and cultured (String quartet & Piano) balanced by the folky and earthy sounds of the Dholl, Duduk and Oud. The piece is organized along the themes of the poems and the ensemble is used in varying combinations (full ensemble, Accapella voices, with or without piano etc.)

The writings of Nagash are both profound and simple, conversational and poetic. The poems can be grouped by different themes. Some poems being lamentations and ruminations (#6 On The Vanity Of This World, #15 On Exiles). Some poems offer practical advice though often of a metaphysical nature (#4 Instructive words on Avarice and Poverty). Still other poems address a specific idea or event e.g. (#1 Ode on Weddings and Human Happiness and #3 The Rose & The Nightingale)

Of particular interest to me were the texts having to do with the plight of the “Ghareeb”, an exile or wanderer – someone without a homeland. Being of Armenian descent, raised in Philadelphia and New York and now living in Berlin and sometimes Woodstock and Yerevan, the sad state of the Ghareeb was something I (and perhaps most Armenians) can relate to. As a descendent of genocide survivors, I am quite familiar with the stories of split second decisions as to where to run, whom to trust and how to survive the unspeakable tragedy of the Armenian Genocide. How Armenians were scattered throughout the world while fate, luck, and personal fortitude decided where each survivor would end up be it Paris, Boston, Lebanon, Iran or anywhere else on the planet.

I have always been struck that these decisions, made in an instant by the survivors, had repercussions for generations to come.

Through my work as a composer I find myself traveling all over the world quite a lot, often feeling homeless. A modern day “Ghareeb” forced to live away from his homeland and now not even able to define what that homeland would be.

Like most contemporary composers, I am leery of labels and find myself at a loss as to how to describe this piece. Folk or Classical?  Ethnic or Cosmopolitan?  Ancient or Modern?  In the end, it seems a natural product of someone who was raised listening only to Armenian Music in the home, studying European classical music in his youth and surrounded by contemporary rock music. 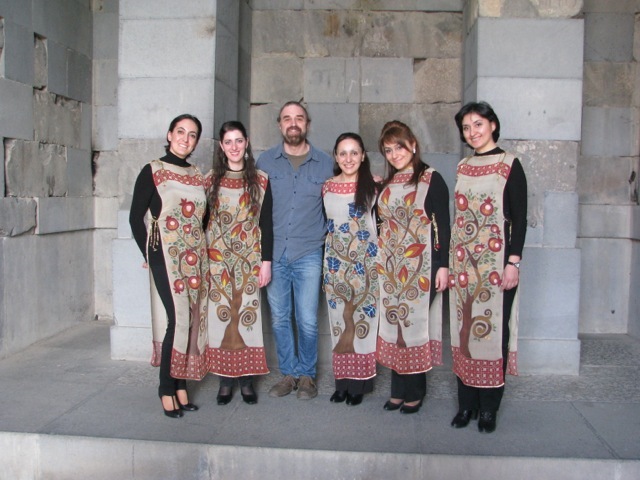